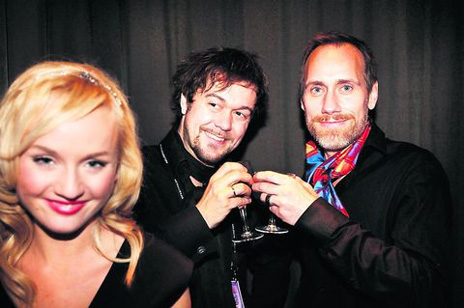 MALMÖ. Anna Bergendahl surprised everyone and became this week’s slam. But behind the success lies a secret super team. – They have meant a lot for this performance, says Anna

With a pair of pink Converse, a guitar and a ballad about being herself  Anna Bergendahl, 18, succeeded to convince the Swedish people to send her directly to the final in the Globe arena.

But what the viewers perceived to be a nice peformance by a rookie artist is, was in fact carefully directed by the record company Lionheart.

Behind the success lies a team of Carola’s former vocal coach, Daniel Zangger Borch, director of Alexander Rybaks victory show – Mattias Carlsson – and one of the Eurovision’s most accomplished songwriters, Bobby Ljunggren.

– I think they have meant a lot for my performance. They have managed to pick up what I have deep inside me, says Anna.

– He has had a huge impact on my development here during the week. In the first rehearsal, I stood perfectly still, hardly daring to move but he came up with something very unusual, she says.

And Mattias Carlsson is lyrical over Anna’s performance in Malmo.

– She is one of the most amazing people I’ve worked with. She is very unique. I think Sweden has a new baby, he says.

Daniel Zangger Borch, Doctor of popular song, has previously helped both Carola and Arash and Aysel, who finished third in last year’s Eurovision Final, with voice coaching. Now, he has worked with Anna Bergendahl for almost six years.

– Voice-wise, she has the best of Sarah Dawn Finer and Carola, he says.

In addition, Bobby Ljunggren, who has written the winning entries “Eternity” and “Hero”, is behind the song.

But despite the massive backing Anna Bergendahl could not believe her ears when she heard that it was her song that got the most votes and went straight to the final. It took several seconds before she realized it was her who Måns Zelmerlöw was talking about. And then everything is black.

– People say that I was dancing but I do not know what I did.

At the after party, she could finally relax and dance with her friends.

– It was a very tough week with a lot of hard work, pressure and nervousness. I have put huge pressure on myself because I wanted to do this so well.

This website uses cookies to improve your experience while you navigate through the website. Out of these, the cookies that are categorized as necessary are stored on your browser as they are essential for the working of basic functionalities of the website. We also use third-party cookies that help us analyze and understand how you use this website. These cookies will be stored in your browser only with your consent. You also have the option to opt-out of these cookies. But opting out of some of these cookies may affect your browsing experience.
Necessary Always Enabled
Necessary cookies are absolutely essential for the website to function properly. This category only includes cookies that ensures basic functionalities and security features of the website. These cookies do not store any personal information.
Non-necessary
Any cookies that may not be particularly necessary for the website to function and is used specifically to collect user personal data via analytics, ads, other embedded contents are termed as non-necessary cookies. It is mandatory to procure user consent prior to running these cookies on your website.
SAVE & ACCEPT
Manage Cookie Consent
We use cookies to optimize our website and our service.
Manage options Manage services Manage vendors Read more about these purposes
Preferences
{title} {title} {title}